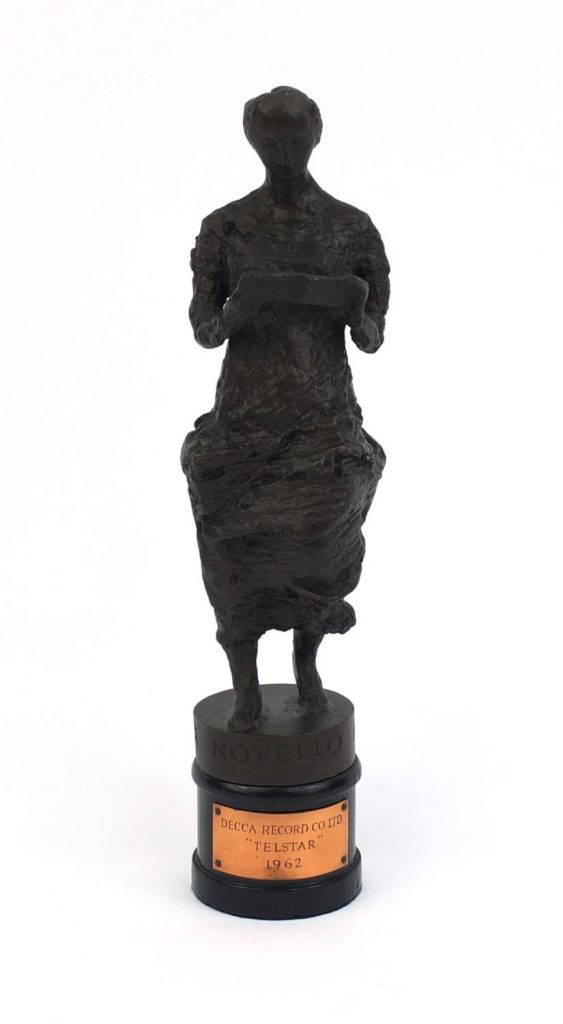 Description:
1962 Ivor Novello Music Award for the record Telstar, Telstar written and produced by Jo Meek above a shop in the Holloway Road London using innovative production equipment to create a space age sound, the record took its name from the communication satellite Telstar launched in 1962 to relay television pictures and telephone calls, performed by the Tornadoes the record reached No. 1 in both the UK charts and the U.S. Billboard Hot 100 selling at least five million copies worldwide , this bronze statue 29cm high was presented to Decca records at the 7th Ivor Novello awards ceremony in London ( PROVENANCE: Found by the vendor in the 1980’s wrapped up in newspaper on a street pavement in suburban Greenwich London, taken to the local police station and later returned as unclaimed property)
Estimate:
£800 – £1200

A Life In The Death Of Joe Meek – Finishing funds

MANY MANY THANKS to ALL our 2016 Kickstarter backers for helping us meet our goal — and ALL our 2012 Kickstarter backers as well!!! We just made it by the skin of our teeth — and we could STILL USE as many MORE DONATIONS as possible — so if you missed the Kickstarter deadline and would STILL LIKE TO DONATE please contact us at Kickstarter or http://joemeekdoc.com/contact/
Again: MANY THANKS and MONDO APPRECIATION to everyone who pledged, upped their existing pledge, up-upped their existing pledge and those who shared this fundraiser on their social networks!!! VERY HAPPY NEW YEAR TO EVERYONE!!!  Click here.